In a sense, this is less of a conventional review than an attempt to discuss some of the ideas in the book, and synthesise them with points that have been raised by the examination of architectures of control: The book is presented as a series of 81 theses, each a chapter in itself and each addressing a specific proposition about ubiquitous computing and how it will be used.

In Thesis 16, Greenfield introduces the possibilities of pervasive systems tracking and sensing our behaviour—and rgeenfield responses on that—without our being aware of it, or against our wishes.

In Thesis 42, Greenfield looks at the chain of events that might lead to an apparently innocuous use of data in one situation e.

The downstream consequences of even the least significant-seeming architectural decision could turn out to be considerable—and unpleasant. In a—superficially—less contentious area, Thesis 34 includes the suggestion that everyware may allow more of us to relax: See also this article by Francesca Cedor. 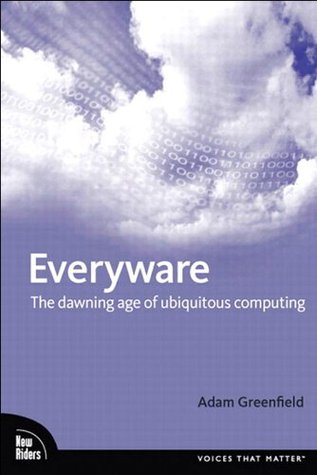 Greenfield makes an interesting point: And rgeenfield what extent are the designers aware of the power they control? But does it happen with other endeavours? As Greenfield comments in Thesis But when… sensors and databases are networked and interoperable… it is a straightforward matter to combine them to produce effects unforeseen by their creators.

From my perspective as a designer I would want to see that ethos promoted in universities and design schools: Ross Anderson has explored this in great depth. The more recent press reports about the Evryware Tech device make pretty clear that the real intention presumably the most lucrative is to use it arbitrarily to stop members of the public photographing and filming things, rather than the other way round.

Jacques Ellul would have thought the opposite, I think, in that keeping people out of these everywaee as much as possible is what provides a better measure of state control. He described the desired state as one of constant stress, where the impulse to act is constant and constantly stifled, except where desired by the state.

Rousing such populations to concentrated political action protest, war is much easier to do when they are already on edge and looking for a sanctioned outlet than trying to build the fervor from a calm state of mind. Menu About me Projects Publications Imaginaries Lab at Carnegie Mellon danlockton on Twitter Search.

Everyware as mass mind control enabler In a—superficially—less contentious area, Thesis 34 includes the suggestion that everyware may allow more of us to relax: Thank you 13 October,